Ron Shine is a pseudonym.

Wherever you turn in China, in parks, schools, shopping malls, transport hubs and apartment blocks, there they are – posters, signs and billboards commemorating the centenary of the Communist Party. Whatever else you think about the party, it can do messaging. Perhaps with the brutality of a sledgehammer, but it expends considerable time and energy on its narrative. A political monopoly – or dictatorship, if you prefer – must jealously assert its right to rule. Democracy renews itself periodically through elections, and casting out the powerful in peaceful transitions. Communist states have no such legitimising rituals, and so must perform their own.

The CCP loves the mass event, the celebration of China and itself (and insisting that the one requires the other). Since I first came to China, I have seen events such as the 2008 Beijing Olympics, the 2009 60th anniversary of the founding of the People’s Republic, the 90th anniversary of the CCP in 2011, the ascension of Xi to power in 2012, the Victory over Japan Day 70th Anniversary Parade in 2015, and the 70th anniversary of the People’s Republic in 2019. Before each one there was a tightening of what could be said in the public sphere. Gradually I realised that there would never be a reversion to the status quo ante. There was always another Big Event coming in the future.

The party is now more visible than any time since the 1970s. At the tail-end of the Hu administration, at about 2010-2011, the party’s reputation within China seemed to be withering. Journalists could write about local officials and corruption (though the central leadership remained off-limits – the New York Times was blocked after revealing the wealth of the family of former premier Wen Jiabao), while social media let people share stories and photos as never before. Perhaps the nadir was the Wenzhou train crash in 2011, when a hasty decision to bury the derailed cars just a day afterwards was widely reviled for seeming to give up the search for survivors. When a two-year-old girl was subsequently found alive in the wreckage, the Railway Ministry spokesman said that the burial was actually facilitating rescue work, but added “Whether or not you believe this, I believe it.” The internet exploded with outrage and the phrase became a meme. The entire CCP was discredited, and it rather felt like it might fade into innocuous desuetude, unconvinced of its own moral righteousness.

Xi Jinping, however, had no such doubts. One of his signature policies was a crackdown on corruption, labelled the “tigers and flies” campaign (indicating that it would go after both the powerful and the small-fry). No longer would the party remain in the background while the country got rich. Now it would take a more active role. But with that came a renewed assault of the inklings of civil society, alternative thought, and free speech that had somehow managed to remain active under the CCP, in the modicum of space open under Jiang Zemin and Hu Jintao.

So went the human rights lawyers, and those who sought to enforce the Chinese constitution (which the party naturally regarded as a threat), and Liu Xiaobo, and almost every popular Western media outlet, while Sina Weibo, the Twitter equivalent, was emasculated. Once it was a place where activist bloggers exposed the expensive designer watches worn by party elites. (Even Xi Jinping reportedly earns just RMB12,500 a month – less than £17,000 a year – from his position). But there too the powerful voices were gradually eliminated.

The party likes to make great claims about its elimination of poverty, the great strides made by the Chinese people, espousing a multipolar world and how it poses an alternative to Western hegemony. (The party seems keen on geopolitical pluralism. But only a fool would believe that). The material advances made by China in the last 40 years are truly, genuinely astonishing. The pace of infrastructure development is jaw-dropping. But a political party is not simply a means for economic development. It is a structure for a society to organise and utilise power. It can do so in ways that are better or worse. And while the party has shown the ability to adapt and to learn, it remains a Leninist institution with absolutely no respect for the rule of law, or the rights of the individual.

Most of all, an iron monopoly on power means it is afraid of its own citizens. Famously, China spends more on internal security than on external security ($193 billion in 2018, 19 per cent ahead of defence spending). But this means fear and distrust permeates China, where there is no civil society, no independent organisations, no genuine property rights, no political representation and so no real sense of stake-holding, of citizen participation and respect. The party leadership acts as though it alone can keep chaos at bay: this might be explicable in a very large nation, where centrifugal forces are always lurking. But it also means that it regards Chinese people as a mob, ready to revolt at any moment. The party’s mentality is therefore always paranoid, and given to grotesque overreactions whenever it feels threatened. Pro-democracy Chinese students living in Australia have been monitored, harassed and intimidated by the government and its supporters, to take just the most recent example. And more broadly, the ongoing destruction of Hong Kong’s freedoms and the brutal genocide in Xinjiang show the party as willing to crush dissent or difference as ever.

Yet it has endured. Despite everything – the Great Famine, the Cultural Revolution, the Tiananmen massacre – it remains in power. The CCP has become the longest-lasting single party state, overtaking the Mexican Institutional Revolutionary party as of 30 June, having now been in power for almost 72 years.

Prognostication seems absurd in the face of this record. It might be better to simply note that the very 1990s idea that economic development would lead to demands for political rights seems to have been entirely wrong. Democracy, or political pluralism, as we’ve seen in Russia and Iraq, is dependent on many more factors than we might have thought. It cannot be transplanted. It must take root within.

But China has almost no precedents which would allow such ideas to germinate. Rather, Chinese politics has been a long cycle of repression and revolts, of despots, plots, and insurgents. So the reason the party endures, I think, is that it ultimately satisfies something in China’s long cultural and political heritage.

Ron Shine is a writer who has lived in several Chinese cities and three provinces over many years, working in education and media. 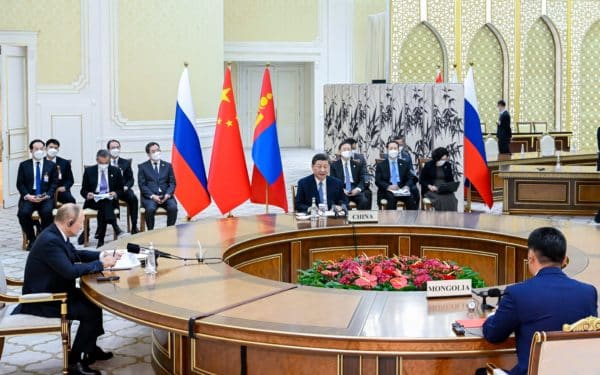 The East is Red: As Russia declines, China gains ascendancy

The Editorial Board | Russia

As Putin and Xi meet in Uzbekistan, the power imbalance is plain to see: Russia is not a partner of China, but a mere client. The war in Ukraine has only increased Beijing’s leverage over Moscow. The two leaders’ face-to-face meeting in Uzbekistan will no doubt highlight this.