Gulag denial: What on earth is going on at Goldsmiths?

There is a case to be made that much of what goes on on the internet should be ignored, but when student activists at a London college start tweeting out a defence of the Soviet gulag it is probably fair to ask what on earth is going on inside certain educational institutions. Here’s the tweet thread (now deleted) that went viral and some context for anyone who thinks it chic to laud communism. 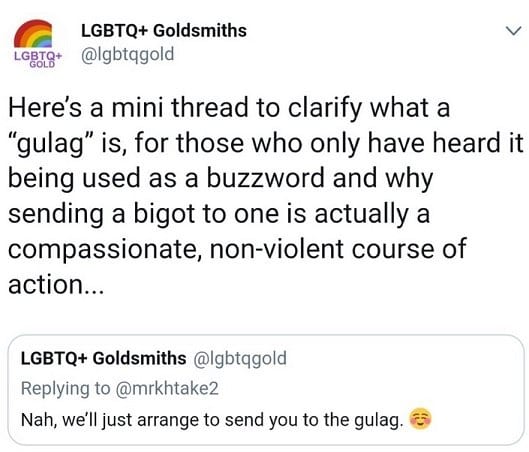 This is a classic trope borrowed from Holocaust denial – genuine distortion of the truth recast as a ‘difference of opinion’, or as a ‘different take’ on the available historiography. The ‘gulag’ was not so much a site of historical trauma as a quaint re-education camp. Still the ‘gulag’ but kitsch.

Well, it’s true that the hammer and sickle no longer features on the red, white and blue of the Russian flag and that Putin’s United Russia is in ascendancy not the Communist party, but the moral character of the Putin system is an identikit replica of the old Soviet world. Power is exercised arbitrarily by the state; citizens are locked up without trial for crimes that they did not commit; and the personality cults of Stalin and Lenin find new expression in the Putin mythology. Got that? Okay, good.

Around 200,000 people in the Soviet Union were sent to the Gulag for telling ‘political’ jokes criticizing Stalin or the State. What metric of compassionate sentencing is the author working with here? There’s an old Soviet quip on the perversity of the prison system – “The first asks the second why he has been imprisoned, and he says, “Because I criticized Karl Radek“. The first man responds, “But I am here because I spoke out in favor of Radek!” They turn to the third man who has been sitting quietly in the back, and ask him why he is in jail too. He responds, “I’m Karl Radek”.

Sinister stuff here. If you didn’t get with the programme in ten years, well you weren’t worth it!

This is a rather quixotic interpretation of the dynamics and logic of a command economy in which control of the state over economic life means labour value is judged at the barest possible level for efficiency purposes. That allows the Soviet State to maximize spending on its own infrastructure – weapons, military supplies and prison guard wages. No-one is technically unemployed – but some must work in labour camps.

Real and terrifying historical trauma being obliterated by a pure puff kitsch vision of a jolly jockey sticks nirvana with round the clock extra-curricular activity included!

No, hold on. When whole groups are subjected to mass acts of collective murder, or collective torture, it becomes much harder to establish what actually happened, partly because the possibility of witnessing from ‘inside the event’ is precluded by the deaths of those who could have born witness to it. Here’s Dori Laub, a respected contemporary writer on historical trauma, on the difficulty of establishing the reality of the Holocaust after the event: “History was taking place with no witness.”

In recent years, there has been a concerted effort taken on by the Russian State to eradicate the memory of the Gulag camps and to rehabilitate Stalin as a cultural icon. Memorialization of the Gulag has been led exclusively by private individuals. There was only one museum specifically dedicated to the Gulag experience in Russia until it was forced to shut earlier this year by state authorities. Yuri Dmitriyev, a historian who has dedicated his career to the researching the mass executions of the Stalin era, was arrested in June and charged with sexual assault after being acquitted of similar charges. He may face 20 years in prison if convicted.

UPDATE: The Goldsmith’s Students’ Union has released the following statement. Clearly, someone over there has seen sense and taken up a Reaction subscription…

Yesterday, Monday 10th September, a member of the LGBTQ+ Society with access to their Twitter account posted tweets containing offensive material. We condemn the abhorrent content of the tweets and they are in complete opposition to the views and values of the Students’ Union.

The Society have broken multiple Union policies and procedures, including failing to adhere to our code of conduct, and we have issued multiple requests for the group to delete the tweets. As such, the Society have been suspended and disaffiliated from the Students’ Union, pending investigation.

Societies are autonomous groups that operate with support of the Students’ Union, governed by our policies and procedures, but their views and behaviour is led by independent groups of students.

Following this, we will ensure that there is other support in place for LGBTQ+ students, including those starting at Goldsmiths later this month, by building networks and facilitating events led by our LGBTQ+ staff and students.