House prices, low interest rates and what happens if the music stops

Just before Christmas, the Bank of England delivered housing nerds an early present in the form of a new paper on the determinants of UK house prices. Authors Victoria Monro and former MPC member David Miles conclude that, relative to incomes, the rise in house prices between 1985 and 2018 “can be more than accounted for by the decline in the real risk-free interest rate observed over the period”. Stop me if you’ve heard that before.

Yet even among those who now concede that that inadequate supply wasn’t the cause of high prices, many still strongly argue that a supply response, to offset the effect of falling interest rates, could nevertheless be the solution. Munro and Miles address this question with intriguing results.

At the end of the paper the authors run a scenario under which UK housing supply is made to respond more strongly to rising prices than has been observed in the past. So would a deregulated planning regime have significantly changed the story of the 156% real terms increase in house prices seen since 1985?

In the scenario, the authors double the measured responsiveness of supply to prices in the UK (taking it to a 0.8% increase in the flow of new supply for every 1% increase in prices). This is closer to supply elasticities seen in Japan, Denmark and Canada and well above those seen in many other countries (see chart). But they simultaneously make two other changes to the inputs, lowering the income elasticity of demand and, most importantly, applying the fall in government bond yields seen in the US over the same period (-4%) rather than the actual UK experience of -5.6%.

The result of these three changes is that prices would have risen by 88% according to the model, a little over half of what we actually experienced. In other words prices would have ended up about a quarter lower than they are today.

Some supply advocates appear to have misinterpreted this as showing that easing supply constraints is therefore the answer. Alas, no. In this scenario, the bigger supply elasticity makes only a small difference. As the authors note:

“[L]ow supply elasticities – the focus of a great deal of attention — could not in itself account for more than a part of the rise in prices. Were the supply elasticity for new house building in the UK much higher, the rise in house prices generated by very low interest rates would likely still have been significant.”

Indeed from the headline results of the paper, it’s clear that the smaller fall in interest rates under the scenario is doing most of the work in keeping a lid on prices.

Isolating the impact of a higher supply elasticity

I asked Victoria Monro what would happen if we only change the supply elasticity and leave all other variables at their observed levels. She very helpfully computed the results. If UK housing supply had been twice as responsive, prices would still have increased by 149% (the green bar below), compared to the model’s baseline prediction of 173% (first blue bar). 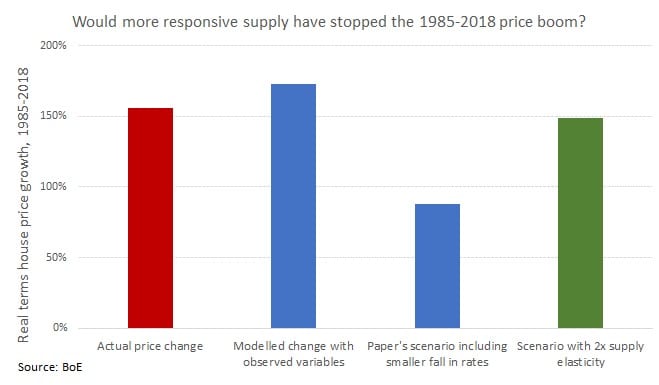 In other words, even if housing supply had been as responsive as in countries that are often held up as exemplars, prices would be only around 9% lower than they are today. All of this is pretty much exactly in line with the implications of MHCLG’s own model sensitivities (not to mention the rest of the literature), resulting in very similar numbers to those I’ve calculated before.

Of course, 9% cheaper houses is not something to be sniffed at. Using the paper’s elasticities, it implies the addition of around 1.3 million extra surplus homes (taking the surplus — i.e. vacant— housing stock from the 5% it sits around today to approximately 10%). Whether the benefits of so many extra empty homes outweigh the costs is a separate question for another day.

But what is beyond doubt is that even much more responsive housing supply would not significantly have constrained the price boom, nor will it do much to make houses more affordable from here onward. However the insights that flow from the analysis go wider.

The Bank’s evolving view on housing

It seems a significant shift is underway in the Bank’s view of the reasons for the boom in house prices of recent years, with potentially important implications for financial stability.

Back in 2014 Governor Carney blamed rapid price growth on a “chronic shortage of housing supply”. With no imminent risk of a housing glut, the implication was that house prices were unlikely to drop dramatically. Now that two separate teams of Bank researchers have concluded that the boom has really been driven by interest rates, this puts the financial stability risks posed by the housing market in a rather different light. Indeed, as the authors make clear, even relatively small increases in gilt yields could probe the outer limits of the Financial Policy Committee’s stress tests.

None of this means that the Bank’s efforts to accommodate the global decline in interest rates — cutting the base rate to unprecedented lows and undertaking QE — were or are the wrong policy. Far from it. But the socially and financially troubling side effects of low interest rates on the housing market can no longer be passed off as a failure of housing policy.

Time to speak up?

Of course, the Bank’s job is to worry about the stability of the financial system. But even if lenders could swallow a 30% drop in prices, quite a lot of youngish homeowners might be more than a little peeved at finding themselves deep under water. And since high-LTV lending has been gathering pace, there are now an increasing number of them in the firing line.

If the prevailing view has changed, and the Bank now believes prices are highly sensitive even to limited normalisation of interest rates, shouldn’t they make sure households get the message? The music may be playing, but would-be owners don’t have to get up and dance.

Understandably, the public debate spends a lot of time lamenting the plight of people struggling to get on the housing ladder. But maybe we should worry just as much about those on the lower rungs who have sunk (or will sink) large amounts of their savings into assets whose value could quickly evaporate. Rather than executing a silent U-turn, the Bank should lay out the risks for households implied by its reappraisal.

Meanwhile for the Government, which has underlined its determination to raise home ownership, the dilemma posed by the new diagnosis is even more stark. Is it wise — or indeed ethical — to encourage families to take very large and unprecedentedly risky bets on the future path of interest rates that most don’t understand?