How Britain ended up facing down Russia on its own

Last August, as the final American helicopters took off from Kabul, leaving Afghanistan in the hands of the Taliban, US President Joe Biden gave the most important press conference of his career. “As we turn the page on the foreign policy that has guided our nation the last two decades, we’ve got to learn from our mistakes,” he declared. According to him, the decision to wind down the two decades-long deployment in Central Asia was “not just about Afghanistan – it’s about ending an era of major military operations to remake other nations.”

However, as British officials scrambled to get their people out of the country in the wake of Washington’s troop withdrawal, it was clear London would take a very different line. Branding the move a “mistake,” Defence Secretary Ben Wallace insisted that the coalition owed it to its international partners to stay the course and push back against the Taliban. In stark contrast to Biden’s pledge, a review of its foreign policy published last year committed Britain to continuing to play a significant role around the world and taking on countries like China and Russia.

Now, barely six months on from the Afghan crisis, the UK is again breaking rank with its allies to strike a more assertive stance – this time, though, the split is in Europe. With Western leaders warning that Moscow could be on the verge of ordering an invasion of neighbouring Ukraine, the British government has emerged as Kyiv’s most vociferous supporter, alongside the US. Whitehall has begun laying on cargo planes to deliver weapons and ordered a contingent of elite army Rangers to deploy in the Eastern European country. RAF surveillance aircraft have also been spotted in Ukraine’s airspace.

Russia has consistently denied that it is planning to launch a military offensive, despite persistent reports that around 100,000 Russian soldiers could be camped out along the shared border. Rejecting the protestations in a headline-grabbing intervention on Monday, Prime Minister Boris Johnson said that “the plan for a lightning war that could take out Kyiv is one that everybody can see” and announced Britain is leading on plans for new sanctions.

That verdict, however, is not shared by many other European capitals. While Johnson and Biden have signed off on military measures and potential packages of sanctions, other leaders have been more muted. Germany has drawn ire in recent days for blocking the export of weapons to Ukraine, with Foreign Minister Annelina Baerback describing the move as an obligation “rooted in our history.” According to her, “the idea that Germany delivers weapons that could then be used to kill Russians is very difficult to stomach for many Germans.”

French President Emmanuel Macron has likewise called for restraint, calling for talks between Moscow and Brussels and backing a European-led dialogue instead of deferring to Washington, which has been holding tense and increasingly pessimistic talks with Russia, which is seeking assurances Ukraine will be barred from NATO membership. Macron’s speech to the European Parliament was widely characterised as a challenge to Washington’s more belligerent approach and a rebuttal to Secretary of State Antony Blinken’s call for “unity,” and was met with dismay from Poland and the Baltic nations, which have been calling for a harder line.

On Monday, the US and UK announced that they would begin evacuating some diplomatic personnel and their families from Kyiv in the face of a potential Russian military invasion which, according to American officials, could “come any time.” However, in a near-instantaneous rebuttal, the EU’s top diplomat, Josep Borrell, announced that Brussels would not be following suit and that there was no need to “dramatise” the risk of conflict breaking out.

Worse still for Blinken’s hopes of presenting a unified front towards Russia, on Tuesday Croatian President Zoran Milanovic said that the rising tensions were the result of Western states increasing their presence in Eastern Europe. “We won’t have anything to do with it, I guarantee you that,” he blasted in a televised address. “This isn’t about Ukraine or Russia – it’s down to the dynamics of American politics,” he went on, before insisting that “the place of Ukraine is not in NATO” and urging dialogue with Russia.

The Ukrainian ambassador in Zagreb has since demanded an apology for the rant, the most incendiary from a leader of any NATO member state. Despite that, the comments echo a sentiment at least partly shared by the Eastern European country’s own president, Volodymr Zelenskyi who, in his own address to citizens last week said that the risk of conflict with Russia has “existed for more than just today and hasn’t been growing worse – there is just more hype around them now.”

While anxiety abroad about the prospect of a Russian military incursion has seen Ukraine’s military refitted with new Javelin missiles from the US and handed a billion-dollar financial assistance package in the past few days alone, it is having increasingly severe repercussions. It is clear that the prospect of war is also beginning to bite, with the economic shock sending Eurobonds skyrocketing and effectively shutting the country out of global financial markets.

Now, Ukrainian officials are seeking more and more to downplay the risk of outright hostilities. Oleksiy Danilov, the Secretary of Kyiv’s Security Council, reiterated the President’s warning, telling the public not to panic. “The number of Russian military troops isn’t increasing in the way many people are claiming at the moment,” he said. “Are they doing manoeuvres there? Yes – but they were doing that all along. This is their territory; they have the right to move around there. Is it unpleasant for us? Yes – but it’s not news – and if it’s news to someone in the West, then I apologise.”

The final straw appears to have come earlier this week when both the UK and US announced they would draw down personnel numbers at their embassies in Ukraine, evacuating some staff and their families. In a furious response, Zelenskyi called the decision “extremely disappointing” at a time when he believes “there is not a remotely imminent threat to Kyiv.” At the same time, he went on, “frankly these Americans are safer in Kyiv than they are in Los Angeles… or any other crime-ridden city in the US.”

However, that bombshell diatribe found no supporters on Wednesday during a debate on the issue in the UK parliament, with Britain seemingly far more united on the issue at home than with the rest of the international community. Both Johnson and Leader of the Opposition Keir Starmer backed the calls to support Ukraine militarily, with the Labour politician going further and demanding a crackdown on wealthy Russians investing cash and assets in the UK.

A rift is now even opening up in practice between London and Ukraine’s most reliable international partner, Washington. In a lengthy, unscripted press conference last week, Biden implied that the US may not step in in the case of a “minor incursion”. Facing criticism from Zelenskyi, who insisted that no Russian military action could be defined as minor, the American President backtracked. The row, combined with the growing divisions among European NATO states, has created the impression that the bloc cannot be relied upon in the case a non-member state calls on it for support.

As a result, Britain is taking unilateral action and not waiting for its allies. According to Michael Clarke, a former director of the Royal United Services Institute, “the UK has the imperative here, and the opportunity, to show what “Global Britain” might mean in an important security context.” Military affairs, he said, are “one of the few areas where our European partners still have to take us seriously.” While in Russia, the Ukraine crisis is hardly mentioned in conversation or on state television, in British media the foreign policy issue had become one of just two major rows attracting coverage and airtime.

London is also far less dependent on Russia economically than many other European nations. Only around 2 per cent of British gas comes from Russia, compared to about 70 per cent of Germany’s. Unlike much of the EU, the UK has virtually no areas of collaboration with the Russian government left in place after high-profile incidents like the poisonings of Alexander Litvinenko and Sergey and Yulia Skripal. 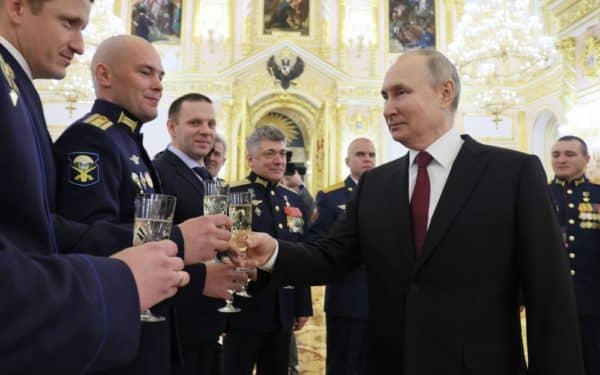