James Damore was right: positive discrimination is illogical and counter-productive

The response to the firing of the author of the infamous “Google memo” for “violating the Google code of conduct” bears worrying resemblances to the coverage of the recent Charlie Gard legal battle. In both cases, many commentators appear not to have read the relevant documents in their entirety before launching into analyses of them. As a result, unfounded assumptions have gone viral, and those who don’t have the time or inclination to read the original in full are being sucked in to the hysteria.

To recap, “Google’s Ideological Echo Chamber” was an internal memo written by American-based Google engineer James Damore on the company’s ideological stance toward diversity. The memo, which was circulated on an internal mailing list, focused on Google allegedly shutting down the conversation about diversity, and suggested that gender inequality in the technology industry may not be solely due to cultural bias. The memo leaked, and commentary on it went viral online. Google CEO Sundar Pichai responded by saying that the memo “advanc[ed] harmful gender stereotypes”, and on 7th August, Damore was fired.

Since the memo’s publication at the beginning of the week, The Telegraph, Guardian and Washington Post (along with other publications) have consistently referred to the document as the “anti-diversity memo” as a way of identifying it in headlines. Notably, none have used quotation marks. It is implied that it is beyond debate that the memo is “anti-diversity.” Yet, read it and you see plenty of evidence to the contrary. There is a strong case to be made for the memo being more pro-diversity than the positive discrimination policy to which it so boldly objected.

It is worth, at this point, quoting the memo at length:

“I strongly believe in diversity, and I think we should strive for more. However, to achieve a more equal gender and race participation, Google has created several discriminatory practices

-Programs, mentoring, and classes only for people with a certain gender or race [5]

-A high priority queue and special treatment for “diversity” candidates

-Reconsidering any set of people if it’s not “diverse” enough, but not showing that same scrutiny in the reverse direction (clear confirmation bias)

Evidently, Damore does not object to Google’s desire for diversity, he objects only to the methods the company uses to try and achieve it. A positive discrimination policy, he argues, cannot cultivate diversity because the argument behind it is based on the assertion that men and women are exactly the same. The logic behind positive discrimination goes like this: there are no differences between men and women, therefore gender disparities in certain sectors can only be the result of cultural bias, and that bias can only be corrected with equal and opposite bias.

As Damore says, there is an obvious hole in this logic. It is impossible to hold both the view that diversity is necessary and positive while at the same time holding the view that all groups are the same. If the differences between men and women are only physical, the whole concept of gender diversity is ludicrous, and a policy to correct bias is redundant. If men and women are no more different to each other than people with different eye colours, running special classes to support women in technology would be akin to giving special treatment to people with blue eyes, or people who like to wear red.

James Damore’s suggestions on how to increase diversity make more sense, mainly because he seems to understand that the bedrock of diversity is difference.

After stating, with evidence (obviously you can find evidence for the other side too, but the logic still stands), several biological differences between the average male mind and the average female mind (he painstakingly points out multiple times that he is speaking on a population level not an individual level, another vital nuance which has been obstinately overlooked), Mr Damore goes on to suggest a variety of ways in which tech companies could appeal to those with classically feminine personality traits. These suggestions, he believes, would actually stick, because they would do more than just ticking the right boxes; they would actually benefit the company:

-Women on average are more cooperative

Allow those exhibiting cooperative behavior to thrive. Recent updates to Perf may be doing this to an extent, but maybe there’s more we can do. This doesn’t mean that we should remove all competitiveness from Google. Competitiveness and self-reliance can be valuable traits and we shouldn’t necessarily disadvantage those that have them, like what’s been done in education.

-Women on average are more prone to anxiety

Make tech and leadership less stressful. Google already partly does this with its many stress reduction courses and benefits.

Unfortunately, as long as tech and leadership remain high status, lucrative careers, men may disproportionately want to be in them. Allowing and truly endorsing (as part of our culture) part time work though can keep more women in tech.

Feminism has made great progress in freeing women from the female gender role, but men are still very much tied to the male gender role. If we, as a society, allow men to be more “feminine,” then the gender gap will shrink, although probably because men will leave tech and leadership for traditionally feminine roles.

Rather than denying difference between the sexes, and thereby undermining the need for diversity, Damore acknowledges and embraces the differences and comes up with suggestions for making the tech industry more attractive to the sorts of people it needs. The guy isn’t perfect, the list is obviously not complete – but at least he’s giving it a go.

It may well be that we need more women in the tech industry. If we do, it is because the tech industry would be a richer place if it had more people exhibiting characteristics which, overall, are more typical of women. If this is the case (which I think it probably is) women don’t need a patronising leg up, the tech industry needs to adapt to attract more women.

Arbitrary social engineering and stifling of debate has been tried, and it doesn’t seem to have worked. Maybe it’s time we gave James Damore’s approach a go. 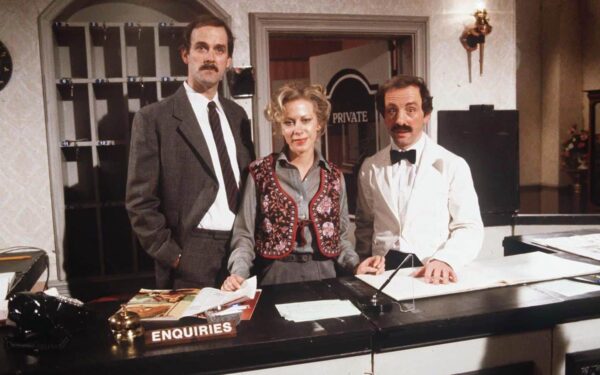 John Cleese is set to revive the series with his daughter, Camilla. Don’t say it too loudly but… it might even succeed.