Productivity beyond the pandemic

Prior to the Covid-19 global pandemic, one of the biggest challenges facing the UK economy was undoubtedly sluggish productivity growth.

The story of progress in productivity, or the amount of output produced per worker or each hour worked, is the story of human progress. Advances in technology, the organisation of production and accumulation of capital mean a worker today produces in two weeks what a worker of the past would have produced in a year.

These gains in output per hour worked are what enable societies to enjoy better standards of living or spend less time at work. We have tended to focus on the former – predictions by economist John Maynard Keynes in 1930 that we would only be working 15 hours a week have not come to pass.

In the UK, this great engine of growth appears to have slowed, if not stalled altogether. From 1971 to 2007, output per hour worked grew reliably, averaging an annual rate of around 2.3%. Since productivity began to recover after the global financial crisis in 2009 up until 2019, output per hour worked has grown at only 0.5% a year. The cause of this slowdown is termed the “productivity puzzle”.

Various causes of this slowdown have been proposed including low interest rates, low investment, short-termism in the corporate sector, austerity, Brexit and mismeasurement to name but a few. Despite considerable study, no definite consensus on the cause or cure for this malady has emerged. The problem is particularly acute in the UK but is seen in most advanced economies.

Covid-19 is likely to be further bad news. Productivity in the UK dipped in the first quarter of the year and is likely to fall further as estimates suggest that the fall in output has been greater than the fall in hours worked.

The global financial crisis cast a long shadow in the productivity statistics and Covid-19 may well do the same. Existing factors dragging on productivity such as weak investment and uncertainty will be amplified by the pandemic while new factors such as prolonged unemployment, bankruptcies and interruption to education may erase some of the limited productivity gains seen in the last decade.

Some of this was down to population growth, but even on a per capita basis, national output rose 4.6% as unemployment fell to levels not seen since the 1970s. By the first three months of this year, economic inactivity had reached a record low.

The long run of good news for the labour market has now sadly come to an end. The National Institute of Economic and Social Research is forecasting that unemployment will reach almost 10% by the end of year, up from the rate of 3.9% seen in April. The labour market has shown great resilience before however, with the eventual rise in unemployment following the global financial crisis far lower than feared by some at the time. Despite this, if even a small proportion of employees who have been furloughed lose their jobs, a sharp rise in unemployment is unavoidable.

An immediate challenge for this year and next therefore will be supporting the labour market by encouraging businesses to hire and assisting job seekers. While some policies such as active labour market programmes are relatively inexpensive and efficacious, others such as whether to proceed with raising the minimum wage or intervene in the private sector are politically fraught.

Looking further ahead, as the economy recovers and unemployment falls, there is a more optimistic case for productivity. Since March we have seen sudden and transformative changes across many sectors of the economy, not all of which have been negative.

Businesses have had to adopt new ways and methods of working. These include moving to direct sales, reviewing supply chains and product ranges, adopting new digital technologies and training staff in related skills. Consumers too have changed their behaviour during the pandemic. While some of these changes may be temporary, others will be permanent, leaving lasting and enduring benefits for productivity.

The prevalence of working from home also seems something that might be here to stay. An unscientific survey of attendees at our weekly webinar last week found no one who wished to return to the office five days a week, with 76% indicating they would prefer to work in the office only two or three days a week, representing a huge change from pre-pandemic levels.

Some evidence of what this might mean for productivity comes from researchers at Stanford University, who studied the impact of a travel booking agency in China moving to home working. They found that moving a group of randomly selected employees to home working four days a week increased performance by a staggering 13% due to fewer breaks and sick days, and workers handling more calls due to the quiet and convenience of being at home. They also reported higher job satisfaction and lower rates of attrition.

Offering home working to all employees saw even greater gains of 22% in employee performance. These gains came from workers selecting their own working arrangements – working from home didn’t suit everyone. Around half of those who had been working from home chose to return to the office, some having not performed well at home and others finding that they missed the social contact.

This fits with some recent Deloitte research which surveyed UK adults and found that 55% believed their colleagues were just as, if not more, productive working from home. 54% indicated they would like to work from home more often once current restrictions are completely lifted.

Home working was not without some costs – those working from home in the Stanford study were 50% less likely to receive a promotion after adjusting for performance, suggesting there may be some truth to the adage “out of sight, out of mind”. Others have speculated that these results from a call centre where work is perhaps largely routine may not carry across to more knowledge focused sectors, where idiosyncratic encounters, relationships and networks may be of greater importance.

The research by our colleagues in London also found lower enthusiasm for home working among younger adults, perhaps reflecting the loss of opportunities to learn from senior colleagues or greater difficulty in accessing a quiet and comfortable space to work in at home.

Still, the benefits of slashing office costs and reducing time spent commuting (shorter commutes are correlated with higher life satisfaction) are likely to be convincing enough to precipitate lasting change in many sectors.

Indeed, history suggests that economic shocks with the reach, persistence and magnitude that we are currently seeing often lead to far reaching structural change. Post-GFC regulation has given us a more robust banking system. The Hoover Dam and the TVA were enduring legacies of the New Deal. German labour market reforms of the early 2000s were a response to the faltering performance of the German economy through the 1990s.

The post-war Keynesian consensus emerged partly in response to the Great Depression. The Keynesian consensus lasted about 40 years before eventually foundering amid the economic turmoil of the 1970s to be supplanted by monetarism. Forty years on that approach seems less-suited to the challenges of near-zero interest rates, disinflation, inequality and climate change.

What marks this crisis out from those of the last 80 years is that Western governments appear fiscally unconstrained – they can borrow at negligible cost on a vast scale. The economic and political difficulties of raising taxes or cutting public expenditure suggests that, bond markets permitting, governments are likely to run sizeable deficits well into the recovery. The question is how this activism can be harnessed to raise productivity and long-term growth.

For an economy which ranks highly on measures of attractiveness to business the UK does relatively poorly on infrastructure provision and vocational education. Underfunding plays a major role in both and only the government has the heft to make a major difference in these areas. Regardless of the progress of the virus, better infrastructure and vocational training would lay the foundation for a stronger, more productive recovery. 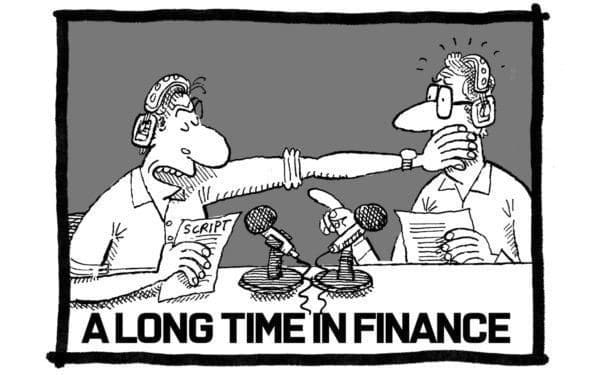 A Long Time in Finance – Barclays: The Bank That Really Wanted to be Big

Neil and Jonathan talk to author and former banker Philip Augar about where Barclays’ urge to grow came from.