The Turkic World is caught in a downward spiral into chaos

In Uzbekistan, this time of year means only one thing – cotton picking. From September until the end of the year, the white fields are dotted with labourers working to harvest the crop that makes up almost a fifth of the country’s total exports. For almost a century, however, this rural scene has had a darker side. Since the adoption of a planned economy in the 1920s, more than 100,000 teachers, doctors, schoolchildren – Uzbeks from every walk of life – have been forced each year to work in the fields, often for no pay.

This year is different. In March, President Shavkat Mirziyoyev eliminated the Soviet-era production quotas that had driven officials to mobilise the whole country each season. His predecessor, Islam Karimov, had maintained a tight grip on the country since before its independence from the Soviet Union and had seen little reason to change tack since then. But the new decree is just one part of a package of reforms unveiled by the President since taking power in 2016. Across industry, civil society, the judiciary and the political system, Mirziyoyev has ushered in a focus on modernisation, liberalisation and fairness.

A month or so ago, the picture across Central Asia was looking similarly rosy. Just across the mountainous border in Kyrgyzstan, the country was preparing for a parliamentary election hailed as likely to be the most transparent and inclusive in its history. For a country with a past of political and ethnic violence, such a transformation in the space of a decade was a remarkable achievement. Elsewhere in the region, the outlook for Turkmenistan and Azerbaijan was positive as well, with increasing living standards and an influx of foreign direct investment.

But since then, the wheels have come off the wagon and the Turkic-speaking world has been plunged into chaos. The igniting of a ground war in the disputed, de facto Armenian-controlled region of Nagorno-Karabakh, which began a month ago today, has left around a thousand dead and thrust Azerbaijan, along with its ally Turkey, into a precipitous conflict that threatens to draw in neighbouring powers Russia and Iran as well. The result is the first new live conflict the region has seen for some time and the consequences for the stability of the wider Turkic World could be profound indeed. 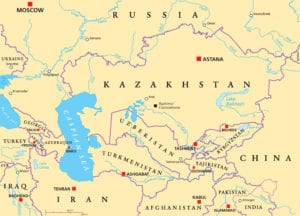 At the same time, international observers were bitterly disappointed with the outcomes of Kyrgyzstan’s elections at the start of October. Despite high hopes for the emergence of democracy and accountability, there was no peaceful transfer of power, with thousands of protestors taking to the streets after allegations of vote-buying and fraud. Activists stormed the parliamentary building, where they made themselves cups of tea in the suite of rooms housing the Presidential administration. They also allegedly torched part of the building.

After the protests failed to subside, the Electoral Commission annulled the results, and the process of forming an interim government began. To the surprise of many, Sadyr Zhaparov became the country’s Prime Minister almost overnight. Zhaparov had been sprung by his supporters from a penal colony at the height of the protests, where he had been serving an 11-year sentence for apparently kidnapping a rival politician.

Zhaparov’s appointment had been intended to placate his supporters, but only one day after he took office as Prime Minister, the Social Democratic President, Sooronbay Jeenbekov, resigned under pressure from protestors. Citing the line of succession, Zhaparov quickly declared himself to be President, holding both offices at the same time.

Zhaparov has promised the rescheduling of elections, which were originally supposed to take place for before the end of the year. However, these have now been delayed until June 2021, to allow time for constitutional changes aimed at limiting voter fraud, but which critics fear will weaken voting rights, particularly for workers living away from their usual towns or cities. There is a genuine concern that Kyrgyzstan will go from a democratic diamond of Central Asia, to another hybrid regime – part authoritarian, part sham democracy –  in the space of a year.

One leader who isn’t worrying about electoral success is Emomali Rahmon, who secured his fifth term as President of Tajikistan with a reported 90% of the vote. While Tajikistan is not itself a Turkic state – the Tajiks are an Indo-Iranian ethnic group – the country is home to significant numbers of Uzbeks, Kyrgyzs, Turkmen, and Tartars. Political events there, in a country which also shares borders with Uzbekistan and Kyrgyzstan, inevitably have an impact on the Turkic World too.

Rahmon has been a central figure in the country since its days as a Soviet Republic, and the hopes that international observers had held out for democracy in Kyrgyzstan had never extended to their Tajik neighbours. But the elections highlighted growing concerns about human  rights in the country, after a promising young rival candidate was allegedly intimidated out of the race by security forces.

A similarly firm grip on the status quo has continued in Kazakhstan, despite hopes to the contrary. Another former Communist leader, President Nursultan Nazarbayev, dominated the Kazakh political landscape for close to thirty years. With standards of living and education levels improving, Nazarbayev faced increasingly frequent and well-attended protests that ultimately led to his resignation in 2019, in what appeared to be an attempt to quell unrest.

For all the excitement and speculation of a new dawn for Kazakhstan, no such transformation has materialised. Instead, Nazarbayev has continued to hold the reins of power behind the scenes and little action has been taken on human rights or fundamental reforms. There is, as always, the temptation to assume that regime change will be a panacea in countries governed by strongmen. In reality, that heritage is hard to shake off.

If the Turkic World, made up of Azerbaijanis, Uzbeks, Kazakhs, Turkmens, Kyrgyz and Uyghurs, has a leading light, it is Turkey itself. And Turkey has set the tone in recent months for belligerence and an erosion of democratic norms. Turkish President Recep Tayyip Erdoğan has been increasingly feeling the pressure of his country’s stalling economy, with news this week that the Lira has fallen to around a third of its value since 2014.

Erdoğan’s typically bombastic response has been to escalate tensions with neighbouring nations to distract from problems at home. Over the summer, he gave a fiery speech in which he blamed the country’s difficulties on neighbouring Greece, and claimed that when the time for military conflict comes, Greece will find itself without its European allies. His rhetoric ups the ante with continental Europe and NATO, and has acted as the soundtrack to growing tensions in the Aegean Sea, where naval vessels from the two countries have recently collided in a standoff over petrochemical exploration.

In terms of foreign policy, in his relations with fellow Turkic nations, Erdoğan has been far from a champion of moderate values. He himself is open to allegations of electoral irregularities and smear campaigns against opposition politicians. Meanwhile, the President has been largely indifferent to issues such as human rights in the wider Turkic World, provided those countries fall in line behind Istanbul on political and economic issues. Most conspicuously, he has not swung the weight of Ankara behind the cause of the persecuted Uighurs in Xinjiang.

In Nagorno-Karabakh, Turkey’s influence has been profoundly destabilising, offering vocal and one-sided support to Azerbaijan’s military offensive in the disputed region. This has startled both Russia and the US, who have separately worked to broker ceasefires with little effect. Reports that Turkey is recruiting hardened Syrian fighters to serve in the conflict from the militias it supports in the North of the civil war-stricken country add to the perception that Turkey’s influence is more destructive than constructive.

But Turkey isn’t the only driver of instability in Central Asia. For all its influence in the Turkic-speaking world, it is far from calling all the shots. Global trends have changed the equation for many countries in the region, with Chinese and Russian investment bringing social changes, such as education, digitalisation and an improved quality of life. For autocracies like Tajikistan and Kazakhstan, this poses problems when dealing with better educated, well-travelled young people who make up the countries’ growing urban populations.

As is often the case in the region, oil is playing a role as well. Countries like Azerbaijan, for example, are major exporters of petrochemical products and their economy is closely tied to oil prices, which hit historic lows this year.

In response, they have had to pass budgets that tighten expenditure at the same time as they face growing domestic concern over responses to the COVID-19 pandemic. In Azerbaijan, this has led the government to seek to play on popularist sentiment to shore up its support. Protests in the capital, Baku, by nationalists saw calls for war with Armenia over Nagorno-Karabakh. Now, a few months later, that is effectively government policy.

Central Asia is in a unique place, geographically and politically. An energy-rich waypoint between East and West, the region’s status as an emerging market, along with closer relations between Turkic-speaking countries and China, have seen them benefit from greater investment and growing political clout. But, while only a month ago, the outlook for the region was optimistic, now much of the Turkic World is feeling increasingly chaotic.

Gabriel Gavin is a London-based policy consultant and an analyst of Eurasian politics.

Welcome to central Brittany, where the landscape is … as old as the hills

In this week’s letter, Walter rescues five chestnuts which he intends to plant in the hope they will be enjoyed by future generations.