Why Sturgeon is at it on state pensions after independence

What is the SNP leadership playing at on the state pension? There has been a flurry of stories since the party’s Westminster leader Ian Blackford, a humble Highland investment banker as writer Alex Massie calls him, said last week that after independence the rest of the UK would be obliged to carry on paying the state pension of pensioners in Scotland.

The notion is obviously, inherently bonkers, in both practical and political terms. Taxpayers in England, Wales and Northern Ireland would not tolerate paying UK state pensions to Scots after Scotland left the UK. Any party seeking to govern the rUK would take about five seconds to think about this and come up with a robust statement accompanied by a loud raspberry.

The state pension is not paid from some giant pot, with a personal fund accrued over the course of a working life and paying NI. That’s a nice myth. It’s paid out of current taxation. Today’s taxpayers are paying for state pensioners now. So, there is no share of a pot that transfers or continues payments after independence.

The SNP seemed to acknowledge this at the time of the independence referendum in 2014. In the Scottish government’s 2013 White Paper on independence it accepted the state pension for Scots would be paid by the post-independence Scottish government from Scottish taxation. The rUK, being another country by then, would have nothing to do with it. It would simply make this a test of citizenship. The numbers involved in Scotland are too large to do otherwise.

State pensions are different from occupational pensions connected directly to an employment contract or scheme, such as those pensions accrued by civil servants or those in the armed forces. The UK government would guarantee those payments for all rights on pensions related to employment earned up to the day of independence and historically. Ministers accept that.

Blackford’s new policy on state pensions, since endorsed by Sturgeon, is based on the misleading idea that because Scots have paid into a pot (that doesn’t exist) the rUK taxpayers will be obliged to carry on paying Scots.

On social media, assorted Nationalists have defended the shift in increasingly bizarre terms. The UK must pay even after Scotland has, er, left the UK, apparently. One wonders, what is unclear about this and why is it so hard to grasp that leaving the UK means leaving the UK? There’s no negotiation to be had on the state pension. It goes, for Scots, if Scotland goes and it will be down to the Scottish government and taxpayers.

On Wednesday, Nicola Sturgeon, looking less than comfortable, attempted to clarify all this in an interview with Peter Macmahon of Borders ITV. In essence, she endorsed the bulk of the Blackford position:

“The position is as it was set out in the 2014 White Paper. There would be a negotiation on all sorts of things when Scotland becomes independent; about assets and liabilities. And that would include the historical position in terms of national insurance contributions, paid by Scots, and that would take into account and influence the starting position of an independent Scotland. After that, it is for a Scottish government to be responsible for the payment of pensions.”

What assets and liabilities on the state pension? It’s paid out of current taxation.

Blair McDougall, the former boss of the campaign to keep Scotland remaining in the UK, then unearthed a clip from eight years ago when Alex Salmond’s then deputy explained the state pension would not, repeat not, be paid by the rUK government.

“We would guarantee all of the accrued pension rights for people in Scotland. We currently pay for state pensions. There is no money fairy that sits in Westminster and provides all these things for nothing. Our taxes and national insurance already pay for these things. We just cut out the middle man. We would not send all the money to London first, it would come to us.”

There you have it. Then, Sturgeon understood the position. Now, she talks about rUK continuing to pay.

Why has she shifted? Why is Sturgeon at it?

Perhaps frustrated Nationalists, angry the independence that was promised hasn’t happened and with no sign of it happening any time soon, are prepared to countenance ever more “Trumpy” and audacious assertions. There’s a further rise in what is referred to as “Nat Zoomery.” Blackford and Sturgeon are throwing the mob some red meat, suggesting the beastly English, Westminster, are threatening to withhold the rights of Scots in what they’ve paid for in years of tax and contributions. Only state pensions simply don’t work like that, as we’ve established.

In essence, this comes down to money, or the lack of it. The SNP is trying to put together a prospectus ahead of the referendum it will say it is trying to hold in the next year or so. The referendum won’t happen, because these are reserved matters and Westminster won’t agree to it. The Nationalists are committed to trying to hold one, and when it doesn’t happen, as sensible people are telling them, they can crank up the grievance machine yet again to sow further division.

Needing to make the effort sound serious and thought through, rather than bogus, the SNP leadership is compelled to attach some credible numbers to a plan for what independence would look like, and that includes pensions and benefits. The problem is that the numbers are dire, and after the pandemic when the UK spent money across the UK on a vast scale, they’ll be more challenging. On the latest figures, Scotland has a net fiscal balance (including a geographical share of North Sea oil) of -36.9bn, which represents -23.8% of Scottish GDP in 2020-21. The UK net fiscal balance is -14.2% of UK GDP. These are the Scottish government’s own verified figures.

The SNP needs to make the black hole look smaller, so suggests misleadingly that some of the tab, on pensions, would continue to be picked up by the rUK. It hopes voters are so stupid and emotional they won’t question the basis of such sophistry. It is ultra-cynical, but also a sign of desperation and a revealing acknowledgment that the numbers right now make independence a sure-fire route to the impoverishment of pensioners. So, the SNP has to pretend there is some magical solution in which the English pay. 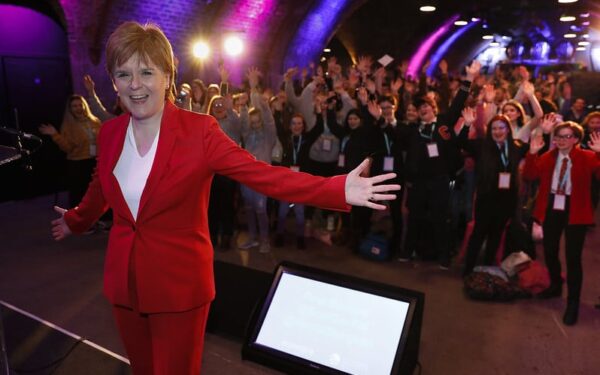