Digital news overload is leaving us dazed and confused

If an old Chinese curse doomed us to live in interesting times, it also said nothing about how confusing everything would be in the always-on digital moment. If the news were a meal, it would be a microwaved nightmare after you’d accidentally pushed the wrong button; a Cronenbergian horror of melted cheese and plastic in which the Met Police issue fixed penalty notices for anybody slapping gender-fluid oligarchs suffering alopecia in the context of a 130-minute biopic about the life of Graham Linehan (uncannily played by Benedict Cumberbatch).

High culture merges with low; geopolitics with celebrity. Here’s Christopher Biggins on nuclear reactor security as J.K. Rowling is deployed by Russia and UK citizens are given a three-minute warning before the culture war cedes control of the world to the cockroaches. Those lucky six-legged bastards wouldn’t realise what they’re missing when, over on the BBC, it’s the Queen’s ailing knees causing Hugh Edwards’ right eyebrow a fit of concern, as Angela Rayner worries about men going to the GP to be asked if they’ve been interviewed by Kay Burley.

Next up: Lawrence Fox and James Melville discuss if Jane Campion has just become the first bespectacled person-with-a-womb to win the Best Director Oscar for her three-hour documentary about Jordan Peterson’s entropic pregnancy, “Revenge Against God for the Crime of Being”.

How is a sane person meant to keep up with such a newsfeed? How are we meant to speak when anything we do say represents a state of reality no longer applicable given how the ever-advancing zeitgeist has moved on? How, indeed, are we meant to communicate when words are beginning to lose all meaning, when “tax-cutting” means “tax-increasing”, “levelling up” means improving the lot for the super-wealthy, and “breaking the law” doesn’t amount to law-breaking?

Donald Trump issues a presidential proclamation about a hole-in-one and then asks Vladimir Putin to interfere in the 2024 election. But before we can decide if it’s a case of corruption or the banality of privilege, the agenda has changed with the afternoon shift. Here’s Dolly Parton in the running for the Rock’n’Roll Hall of Fame, despite admitting she doesn’t deserve the honour. Did we hear it right or imagine that Lord Michael Grade had been poisoned after he tried to negotiate peace between Will Smith and Chris Rock? No, no, it was a minor peptic upset caused by Rishi “Let them eat many breads” Sunak’s gluten-rich diet. Sunak himself is still touring TV studios to promote his budget, which is designed to punish oligarchs earning less than £15,000 a year.

But before your mind has time to digest that, here’s Boris Johnson promising that “[i]f your child falls behind in maths or English, we are asking schools to intervene and help them get them back on track.” A school “teaching”? Whatever next? Oh, no need to answer. We can see it from here. It’s Sir James Dyson’s new headphones with an integrated face shield that will make you look like a Cyberman (or, erm, Cyberperson?) Suddenly, Sir James is the bookies’ favourite to be the next Dr Who, so here’s David Tennant at the Radio Times Awards and there’s Kim Kardashian who critics now accuse of hiding her “real skin” through Photoshop manipulation. Meanwhile, Ukraine asks for more MLAW anti-tank missiles, now the world’s second-most popular manpad after Joe Wicks revealed his weight gain after eating nothing but P&O breakfast buffets served in international waters…

One might have supposed that the old Chinese curse was grounded in a fear of social instability, but little could they conceive of a culture where digital overload leaves us in a constant state of flux. In the age of social media, when billions of fingers type trillions of words, there is simply too much for anything to make much sense. At some point, it all begins to sound like a Billy Joel lyric. 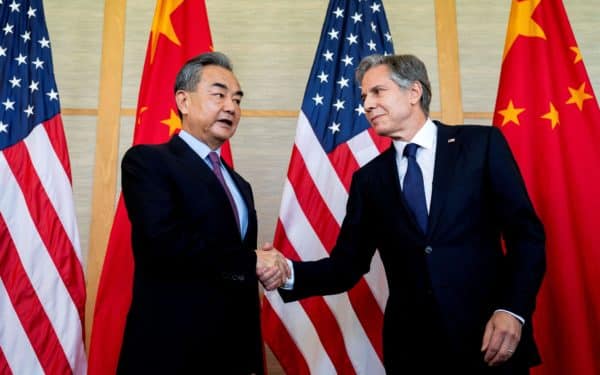