French healthcare leaves the NHS in the shade

Back at the turn of the century, the World Health Organisation reckoned that France offered “close to the best healthcare in the world”. But is that still true? There have been so many crises in the years since, from the financial crash of 2008 and the ongoing Covid pandemic to the acute, and worsening, budgetary squeeze brought about by Russia’s invasion of Ukraine.

On paper, the French have more or less stayed the course. In 2020, France spent 12.2 per cent of GDP on healthcare against 11.9 per cent in the UK. Only Germany spent more – 12.8 per cent – while among the runners-up, further down the list, were Switzerland and Sweden, both widely assumed to be models of their kind.

But the numbers can be deceptive. In the same year, 2020, at the height of the Covid scare, total spending on health in France actually fell by 0.4 per cent, to an estimated €210 billion (£187 billion at the then prevailing rate), which compares to £191 billion for England (not counting Scotland, Wales and Northern Ireland), £46bn of which was allocated to social services, not core medical provision.

Money aside – and when is that ever the case? – the real question is, which country and which system best serves its citizens? And here, the French have continued to keep their noses out in front.

Consider the waiting times in the emergency rooms of two of France’s busiest hospitals, both in Paris:

At the Hôpital Pitié Salpêtrière, situated on the Left Bank, close to the Sorbonne, the real-time delay before seeing a nurse on Monday afternoon was 10 minutes. A doctor would arrive within 84 minutes, and the average time to discharge or admission was 198 minutes. Patients do not back up for hours, even days, on trolleys in corridors.

Next to the Gare du Nord, the urgences at the massive Hôpital La Lariboisière posted equivalent waiting times of 15 minutes, 136 minutes and 269 minutes.

In an emergency, ambulances across France aim to arrive within 15 minutes, though in remote or congested areas it can take up to half an hour. The average waiting time is said to be 14 minutes.

So much for casualty. But for longer-term, elective treatment the figures are also impressive. This year, the average waiting time for a hip-replacement is between three and four months, from the time of the first consultation to recovery and discharge. Heart conditions, once referred by their GPs, will normally be investigated by a consultant within 21 days in the Côte d’Azur and 28 days in Paris, with 70 days being among the worst waiting times recently recorded.

Cancer is taken very seriously in France. As it happens, my wife and I have both been summoned (for the third time this year) for screenings by the Institut National du Cancer. We must hope for the best, but, should we get the thumbs-down, the waiting time from diagnosis to starting treatment is typically less than six weeks. The national target between now and 2025 is one million scans a year, aimed at reducing the number of hospitalisations from an annual total of 155,000 to more like 60,000.

Generally speaking, patients with a potentially life-threatening condition will be seen by a specialist within six days of a referral. Half of such consultations take place within two days.

But not everything is rosy in the consultancy garden. The following is an extract from a letter published this week in Le Monde, reportedly representing the views of 10,000 doctors and nurses across France:

“Throughout this month, we have been confronted with a situation we did not dare imagine. Every day, children are treated lying on trolleys or sitting on their parents’ laps in the emergency room, or in an office that has been requisitioned for treatment. Children are being intubated [having tubes forced down their throats] in corridors because there is no room in the intensive care unit, and treatment is being given too late. Children are being sent home too soon, dangerously soon, for lack of space. They are being transferred out of area by the dozen from both intensive care and hospital wards.”

With winter gathering pace after a long, hot summer, there are reports this month that the country faces a triple-threat epidemic from respiratory viruses, flu and the continuing impact of Covid. Cold weather, made worse by the demands of the energy shortage, have led to a significant increase in the numbers turning up in doctors’ waiting rooms and hospital emergency rooms.

The French for the most part heaved sighs of relief when Covid restrictions and mask-wearing requirements were lifted earlier this year. Now, they are not so sure. The numbers are on the up again and doctors, exhausted after three years of working overtime, are straining to keep pace with demand.

On the cost front, the picture is changing, but only slowly. There is no such thing as an NHS in France, though doctors, nurses and hospitals are, of course, closely regulated at both state and regional level. Most hospitals and GPs’ practices are publicly funded, but the thriving private sector is obliged to treat patients that for any reason cannot be taken care of by the state.

When you visit your local GP in France, you may have to sit in the waiting room for an hour or more, surrounded by others with potentially infectious conditions who stare at you as if your name might figure in their death certificate. But you will be seen and properly examined and, where appropriate, referred to a specialist. The cost of an appointment is one euro, and at the conclusion of the visit, €25 (£22) is paid to the GP, either in cash or, in these pandemic times, sans contact by card.

Central to treatment is the carte vitale, entitling the holder to the full panoply of state intervention. All French adults have one of these, as well as all tax-paying foreigners with an up-to-date titre de séjour. The normal course of events in the event of a serious diagnosis is the following:

To the GP, €25. To the consultant or surgeon, €25 plus up to 30 per cent of the cost of the recommended treatment and 10 per cent of any hospital bill. Should a patient be out of work or fall below a certain income threshold, the state picks up 100 per cent of the tab. For everyone else, the bill is paid for out of pocket or, more usually, by way of top-up insurance that can cost between €1,000 and €1,500 euros a year.

Some personal examples: 15 years ago when my wife and I only summered in France, I contracted serious heart arrhythmia, which my local GP, in matter-of-fact tones, advised might just be about to kill me. The good news is that I was treated by a top surgeon within 24 hours. The downside was that, with my wife already back in New York, I had to drive myself to the hospital, 130 miles away in Rennes. The ambulance bill there and back would have cost me €900. Four days later, to add insult to injury, I was presented with a bill for some €2,500, most of it covering the cost of my stay in a private ward.

If I had been registered in the system, as we are today, my total out-of-pocket expenditure would have come to around €500, payable in installments. In America, the amount, even with basic insurance, would have easily exceeded $10,000.

More recently, my doctor (€25) prescribed a shoebox-full of medicines that he ordained would take care of my gout, enlarged prostate and arthritis. At the pharmacie, I loaded up. Cost to me: zero. But Dr Tyson – who once stitched up my thumb in his surgery after I almost severed it with a scythe – wasn’t done. He felt I should see a cardiologist to check on my arrhythmnia. I was given an appointment for the following week, which resulted in my receiving a heart monitor plus a scolding from the specialist who couldn’t believe that I hadn’t been to see him every 12 months for the previous 15 years. The cost to me? Fifty euros, with the state and my insurance company taking care of the rest.

More recently still, my optician, Pascal, noted that I might be developing a cataract in my left eye. “You need to see an opthalmologist,” he told me. “How long will that take?” I wanted to know. He made a phone call. “Could you make it to her surgery by five o’clock?”

As it happens, the eye doctor was able to assure me that there was no urgency. But she pencilled me in for a procedure next spring. Her bill? €178.12, with reimbursements paid the following month.

I am assured that the health system is under strain in France, and I believe it. The cost to the state is gigantic, and rising, and doctors and nurses are up in arms about their pay and conditions, which, as in Britain, have deteriorated under the impact of Covid and rampant inflation. There are also medical deserts in rural areas, especially (as I know to my cost) in dentistry. Young doctors and others in the medical field prefer to work in the cities. They don’t like toiling away in the deep countryside, full as it is of farmers and the elderly, who never stop complaining.

But I, for one – and my wife makes two – am very glad to be protected by French healthcare, which I continue to believe is, at worst, second-and-a-half to none. If I ever feel like complaining, I remember my experience in New York, just as I was about to undergo a “nuclear” test to see if my heart would see me through into my sixties. A nurse who spoke only Russian had attached a series of electrodes to my naked chest in readiness for the burly specialist who was working his way through the entrails of my insurance paperwork and turning a violent shade of puce.

“Stop!” he said, prodding my chart, not my chest. “Your insurance company has rejected the nuclear test. This has been a complete waste of my time.”  And off he flounced, leaving me shivering in his wake. I was upset, but I refused to get angry as I knew I couldn’t afford a heart attack. 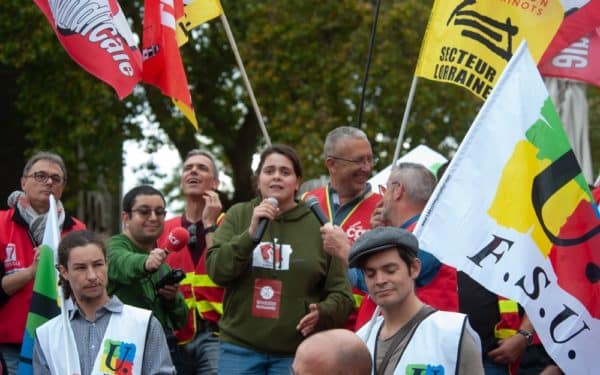 France paralysed as unions slog it out with Macron over pensions

Without a majority in Parliament, the President will have to fight dirty to get his deeply unpopular reforms over the line.