The decision by Paul Givan, Northern Ireland’s little known First Minister, to resign his post just 13 weeks before the next scheduled election to the Stormont Assembly is a calculated act of desperation by the governing Democratic Unionist Party.

Givan’s resignation follows the instruction by the DUP’s agriculture minister Edwin Poots to port officials to halt checks mandated by the Northern Ireland Protocol on goods coming into the province from the rest of the UK.

So far as can be ascertained, officials look to have ignored Poots’s order and are continuing to comply with EU regulations. Unionist may fear that their beloved Ulster is slowly, step by step, being detached from the UK. But government officials, right down to the men and women in uniform watching trucks roll off the gangways – MacNeice’s “handclasps of the land” – are thus far sticking to the rules.

The worry is that this low-level compliance could change if Loyalist paramilitaries decided to act. In that event, there could be widespread street protests, with every likelihood of violence.

In London, the Government, while supporting the DUP’s repudiation of an EU border down the Irish Sea, has so far done its best to stay out of the fray. The prime minister, according to Downing Street, was “unaware” that the DUP planned to suspend checks and “would like the situation to be resolved”.

It is certainly true that Johnson has enough on hisplate at the moment without this latest kerfuffle. But Brussels has warned that any refusal to implement the Protocol would be considered a breach of international law that could end in a trade war between the UK as a whole and the European Union.

So nothing to worry about there.

At Stormont, the Executive’s musical chairs are once more being dusted off. Givan, the son of a prison officer, who took over as First Minister after Arlene Foster was pushed aside in a coup, is widely regarded as a stand-in for Sir Jeffrey Donaldson, the DUP leader, who is presently MP for Lagan Valley.

Donaldson had hoped to remain an MP while taking over from Givan as First Minister after the May elections. But a scheme he and others had hatched at Westminster that would have allowed him to “double-job” was scuppered in the House of Lords and dropped by the Government. His nightmare has to be that he gives up his Commons seat only to find that the DUP refuses to endorse him as Deputy First Minister and he ends up as a mere MLA at a time when Direct Rule might be on the cards.

In the meantime, Sinn Fein has surged ahead in the polls, so that its northern leader, Michelle O’Neill, currently serving alongside Givan, looks almost certain to take the First Minister’s role in the new Assembly. In that event, Donaldson says he would refuse to serve as Deputy First Minister, thus forcing O’Neill to resign and throwing everything up in the air.

Poots, a religious creationist, who is currently suing the Ulster Unionist leader Doug Beattie for “joking” in a tweet that Mrs Poots, a retired nurse, might once have presided over a brothel, regards the Protocol as the the Devil’s work and has vowed to bring it down.

His problem is that his non-DUP ministerial colleagues, drawn from Sinn Fein, the UUP, the Alliance Party and the SDLP, do not share his hardline approach to the Protocol and are in no mood to conspire with him to collapse the Executive. They say that they will carry on in their jobs in the absence of the first and deputy-first ministers. And just to complicate matters further, Poots says that he will carry on as well.

The resulting headless-chicken administration would stagger on, apparently, until April, at which point the current Assembly would be dissolved in advance of the elections.

Unless, that is, it is decided that such an eventuality is too much even for Northern Ireland, in which case the elections could be brought forward to as early as the second week in March

If the polls can be believed (never a safe assumption in the third decade of the twenty-first century), Sinn Fein will emerge as top dog at Stormont, followed, some distance behind, by the DUP, UUP, Alliance and SDLP. But if Donaldson (always assuming he resigns his Commons seat) refuses to take up the job of Deputy-First Minister, O’Neill would be barred from the number one slot, in which event no plausible Executive could be formed and the democratic wheel would stutter to a halt.

At Westminster, the first hurdle to be cleared is what to do about Poots and his unilateral Haltebefehl. Boris Johnson has let the DUP down several times in recent years, not least when he promised there would never be a border down the Irish Sea only to agree to it shortly after. He regularly claims he will get rid of the sea border, but up to now has signally failed to keep his word – one of many disagreements that led to the resignation of Lord Frost as, in effect, his Brexit Secretary.

For its part, the European Commission, while embracing a light-touch approach to border checks, has said it expects the UK to comply with the terms of the Protocol as an integral part of the EU withdrawal agreement. If it does not, we are assured, Pandora’s Box is almost bound to squeak open, with consequences no one can foresee.

Paul Givan is not confrontational by nature. He only serves as First Minister because Poots couldn’t hack it and was in fact rejected as DUP leader just three weeks after the putsch he led against Foster. It is Donaldson who now sits at the centre of this dark web. Will he strong-arm Poots, or are the two of them in cahoots? And what happens if the civil service and port officials go with the Protocol rather than the whims of the DUP?

A lot to play for and any number of red lines to be laid down. The DUP knows that its credibility as the party of the Union is being sorely tested. Sinn Fein at the same time must feel that its time has come at last. As for the voters, while they can be relied on to shake the kaleidiscope, the result is likely to be as confused and colourful – and divided – as ever.

Researchers at UCL have found evidence that the widespread use of antidepressants is “not grounded in science” because depression is not caused by a chemical imbalance.

Doctor visits, haulage and holidays behind bounce in GDP

The latest ONS figures for May revealed that GDP grew by 0.5%, beating analyst forecasts of 0.1%. 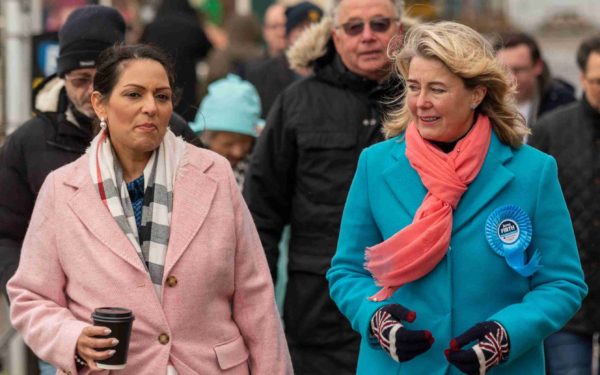 Anna Firth: who is the Tories’ newest MP-in-waiting?