The last leader of the Soviet Union, Mikhail Gorbachev, died on Wednesday night. In a statement issued to the media, his doctors at the prestigious “Kremlin Clinic” outside Moscow announced that the 91-year-old had passed away “after battling a severe and prolonged illness.”

Tributes have poured in from world leaders, including EU Commission President Ursula von der Leyen, who praised him for having “played a crucial role to end the Cold War and bring down the Iron Curtain.” In the West, the man who oversaw the final days of Communism is hailed as a hero but, for the three decades that followed, he was reviled by his own countrymen as having brought nothing but collapse and decay.

Gorbachev took over the reins of an ailing superpower in 1985, picked out by party officials because of his relative youth and fervour — the last two Soviet premiers had, after all, both died after only a short spell in office. Recognising that the world’s largest country was trapped in a state of stagnation, he oversaw unprecedented liberal reforms, known as “glasnost” — openness — and “perestroika” — reconstruction.

In practice, this meant introducing market forces into what had, for six decades, been an entirely planned economy, and relaxing censorship laws that prevented overt criticism of the Kremlin. At the same time, he boosted taxes on alcohol sales and applied restrictions to the sale of beer, wine and vodka in an effort to crack down on drunkenness and boost productivity.

The result was that Soviet citizens had more to complain about than ever, and nobody could prevent them from airing their grievances. Black markets sprung up and local leaders lined their pockets by turning a blind eye, or becoming major players themselves.

Seeing the writing on the wall, Communist hardlines launched an ill-fated coup in 1991, confining Gorbachev to his dacha in Crimea and deploying the army to the streets. However, a catastrophic televised press conference in which one of the lead plotters’ hands wouldn’t stop shaking gave the unmistakable impression they’d bottled it.

Protestors, led by future Russian President Boris Yeltsin, set up barricades around the parliament building to defend their hard-won liberal reforms. The putsch failed, and Gorbachev was released, but the days of the USSR were numbered. Within months, the former Soviet Republics — including Yeltsin’s Russia — had declared their independence, and Gorbachev was left at the helm of a union with no states.

His role may have won him plaudits from contemporaries like British Prime Minister Margaret Thatcher and US President Ronald Reagan, but Gorbachev had never intended to put an end to the Soviet Union. On the contrary, he was a committed Marxist and wanted to save the system he had dedicated his life to. The fact he is credited with bringing it down was a failure, not a success.

In the aftermath, he and his supporters could at least console themselves with having ushered in a new era for countries like Russia, Ukraine and Belarus. The totalitarian political system that had persisted since the days of the Bolsheviks had all but evaporated and, in its place, the promise of prosperity. No longer would Eastern Europe and Central Asia be dominated by dysfunctional, backwards economies, and they seemed set to follow the example of the booming, 1990s-era West. If communism has failed, the thinking went, maybe liberalism could work.

For the vast majority of Soviet citizens, however, the dream of wealth and freedom never materialised. Instead, state industries were portioned up and privatised, sold off to a small cadre of oligarchs picking over the bones of the USSR. Life changed very little for ordinary people, except for losing access to free government services like housing and university education.

Combined with a sense of national humiliation, frustration turned quickly into anger. A poll published by the Russian Public Opinion Research Center last year found Gorbachev was the country’s most hated Soviet figure, with one in five respondents naming him, twice as many as picked Stalin.

When news of his death broke, Russian President Vladimir Putin was the first to send his condolences. However, few can have done as much as him to dismantle whatever legacy Gorbachev might have been clinging onto. Since the start of the full-blown invasion of Ukraine in February, Putin has rolled back the clock on civil liberties and international cooperation to levels not seen since the darkest days of Communism.

Novaya Gazeta, the liberal newspaper that Gorbachev invested his own money and political connections in keeping open, was one of the first casualties. After laws were passed threatening editors with up to 15 years in prison for referring to the “special military operation” as a war or spreading “disinformation” about Russia’s actions, the outlet was forced to shut down operations in the country. Many speculated it would have fallen foul of censorious Kremlin authorities long before, had it not been for Gorbachev pulling strings.

Likewise, Gorbachev championed close relations with the West, even if he wanted to maintain the Soviet Union as a communist state. His talks with Reagan, Thatcher and other world leaders were designed not only to foster trust, but to contain the looming spectre of nuclear war that had haunted both sides for decades. Now, Putin has all but severed those kinds of ties, isolating Moscow on the world stage and effectively erecting a new Iron Curtain across the continent.

In his final weeks, allies of the last leader of the Soviet Union made his feelings increasingly well-known. According to Kremlin critic Alexei Venediktov, the 91-year-old saw his contribution to Russia’s role in the world being taken apart piece by piece. “What Mikhail Sergeevich Gorbachev did is all destroyed,” he said, “all Gorbachev’s reforms—to zero, to ashes, to smoke.”

Gorbachev is expected to be buried in Moscow’s Novodevichy Cemetery later this week, with the grim distinction of having watched both of his dreams die first – the Soviet Union, and a more open, more prosperous Russia. 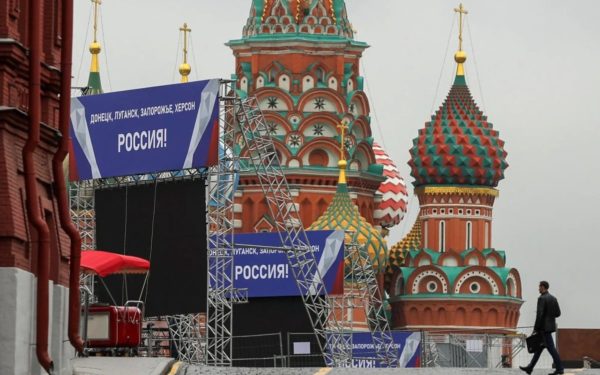