Nicola Sturgeon is finished, and her dream is dead

Christmas can’t come fast enough for Nicola Sturgeon after a period that even the staunchest nationalist supporters must agree has been bruising for the First Minister. Rebellion is in the air in her party and, after 15 years of iron control, the peasants are revolting.

While there will have been multiple reasons for the current dissatisfaction, this desire to express their unhappiness seems to stem from Minister Ash Regan who resigned over the Gender Recognition bill. This single act just six weeks ago seems to have inspired the rest of the party to act.

Sturgeon’s response to Regan was withering and petty and this may also have played a part in spurring on others. Sturgeon runs the SNP with only a handful of advisors and is as disdainful to her own party members as she is to the opposition. There is Sturgeon’s way and no other and anyone who dares to challenge her authority is immediately put in their place. MP Joanna Cherry is the prime example of this but there are many other cases where straying from the party line sounds the death knell for progression within the SNP.

Now Sturgeon, once regarded as sure-footed in her presentation and performance, has suddenly become tin-eared and erratic. She sounds angry a lot of the time. She has always been judgemental but now is dismissive of anyone who doesn’t agree with her, even if it means disregarding the presiding officer’s call to be brief with a curt “this is important stuff”.

There is little doubt that the Supreme Court’s rejection of the SNP’s ability to call a second referendum has dramatically transformed the mood within the party. Most know that Sturgeon’s “de facto” referendum vote at the next general election is a dead end and many in Westminster fear losing their seats if it goes ahead.

There’s been chaos in the last few weeks after Stephen Flynn was rumoured to be challenging the authority of Ian Blackford – a Sturgeon ally – only to have Sturgeon aides intervene to stop him. Then just a fortnight later it is again announced that Flynn is to stand, in the face of opposition from Sturgeon. She then put up her own continuity candidate in the form of Alison Thewliss who was defeated. So, Sturgeon was humiliated by Flynn’s standing, then further humiliated when her candidate was rejected.

The conflict continues with first Pete Wishart standing down from the SNP front bench and then Stewart McDonald has also announced his resignation. Wishart’s resignation letter was bitter and angry while McDonald’s was more conciliatory, but the division is obvious. Ironically, just yesterday, Stewart Hosie said that talk of a split in the Westminster party was “a complete fiction”.

Part of the reason for this is that everyone acknowledges that Sturgeon is near the end of her career. She will probably stay until the next general election but her deputy at Holyrood Keith Brown fumbled when asked if he thought she would still be leader by the time of the next Scottish elections. There will be a vacancy and there is no obvious successor as Sturgeon has never allowed anyone of any ability to rise within the party. Loyalty is valued above ability.

But Sturgeon is clearly smarting from the Supreme Court judgement and is taking aim at everyone, even people she needs to persuade to support independence. Her recent diatribe at the SNP’s annual St Andrews dinner stated: “The so-called partnership of equals is anything but. Tory, Labour, Lib Dem – they’re all joined at the hip. They now have to defend the indefensible.”

Does she no longer need to gain the votes of people who support these three parties for independence to be achieved? Clearly, she does but it would appear she no longer cares.

The SNP now sees the solution as raising the emotional temperature rather than the rationality of the political argument. Firing up the faithful with, as one SNP MSP anonymously claimed in the Times, “their pointless rallies” and ramping up the rhetoric to avoid analysis of its record in government.

All pronouncements are designed to distract from the atrocious performance of the SNP government. From the delayed over-priced ferries to failing school standards, record NHS waiting times, sky high drug deaths, unbelievable financial waste, exorbitant guarantees to subsidise steel contracts, the failing national care scheme which we are invited to have “faith” in, a gender identity bill which experts and even SNP MSPs know is flawed but which has to be steamrollered through parliament to appease Nicola, and numerous other issues which remain unresolved on a daily basis.

A further sign of the growing weakness of Sturgeon’s position is the need to close down debate. A speech by Sturgeon at Zero Tolerance was preceded by an email to delegates stating that nobody should bring up the Gender Recognition Reform Bill as “this is not the place for that conversation” or a climate change activist who directly approached Sturgeon (and there is footage online) about her actions on continuing with North Sea Oil production only to be told by the First Minister that she had to be elsewhere.

The woman of the people persona has cracked, and the real Nicola is peaking through. “The Nation’s mammy” as she once nauseatingly called herself is showing herself to be an intolerant, distant, and unforgiving parent who is angered by her children’s irritating habit of not agreeing with mummy and wanting to have their own opinions.

The familiar responses to criticisms aren’t working anymore. The constant cover-ups, the fear of being caught out, the dread of failure all looms large in a party that has little success to shout about. Official demands to correct inaccurate data about clean energy levels, changing the way schools are monitored to hide declining standards, challenging any questioning of her policies as “doing down Scotland” have all become familiar tropes but they seem tired, and many more people can see through the charade.

While she remains in place physically, you get the feeling that Sturgeon has already moved on mentally. She is going through the motions of seeking independence without any real conviction that it will happen. Meanwhile Scotland remains in limbo. With a declining health service, educational standards falling, the economy treading water, the ferries unbuilt, the debts piling up, the promises unfulfilled, and Scots becoming increasingly desperate for a government that can simply manage the country rather than one solely obsessed with constitutional change.

The author is an Edinburgh-based freelance journalist who has covered the oil industry, health and business for a number of national newspapers including the Times and the Scotsman. 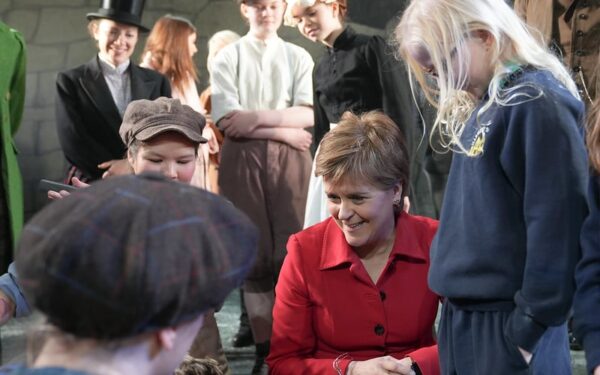 The latest back-peddling is another repudiation of Sturgeon’s own flagship policy.